We’ve had Super Saturdays, Trilogies and Nights of Champions, but it’s time for something slightly different. Cage Warriors is set to finish the year with two nights of back-to-back action in London’s Iconic York Hall, ending one era and ushering in the next. Two nights, each with two championship headliners and undercards stacked with memorable favourites, up and comers and new faces looking to start their journey with Europe’s best MMA promotion. It all begins on Friday night.

The Beast the Enigma

To say that Matt ‘The Beast’ Bonner is one of Cage Warriors more unlikely champions in recent times is no slight on the man himself of the big bag of tools he brings to the Cage Warriors cage. Quite the opposite in fact; it’s testament to the frankly phenomenal swathe Warrington’s Hardest Man has cut through the middleweight division over the last eighteen months.

Rugged, durable and with enough in the tank to give the Duracell Bunny a run for his money, Bonnar has made a habit of weathering storms and dragging opponents into deep waters. Crucially he’s amassed a wealth of cage time, having gone the distance eleven times as a professional. Looking at his first defence of the Cage Warriors middleweight title from a purely statistical point of view, that could be where his biggest advantage lies.

Djati Melan comes into Friday’s headliner as something of an enigma. It’s not his first Cage Warriors rodeo; that came back in early 2017 when he punched out Arvydas Juska just four minutes into the very first round. The Ivory Coast native, now fighting out of Paris, France has competed just twice since, averaging just one fight per year since his debut in 2014.

Still, a highly touted prospect around the time of his initial appearance in the yellow gloves, Melan’s lack of activity only adds to his air of mystery. Clearly a high-level operator, still undefeated and – one would assume – not carrying anywhere near the same amount of niggles, wear and tear usually associated with seven years of professional MMA, Melan could be twenty-five minutes away from shocking the world. 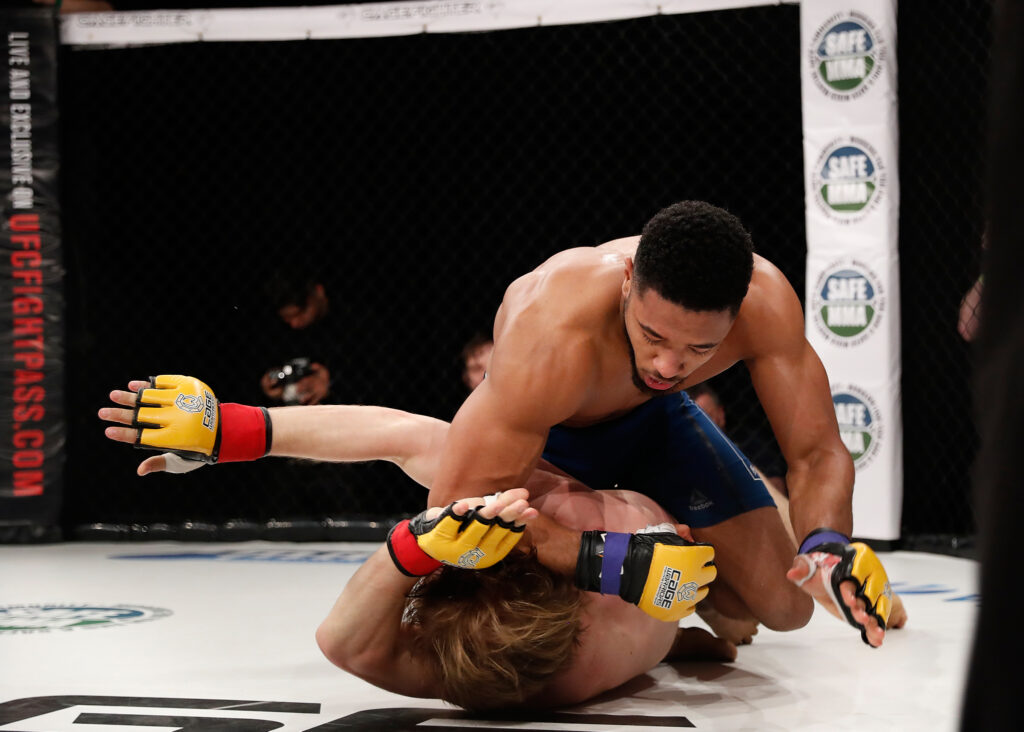 The champion will likely be favoured by bookmakers based on his strength of schedule alone, but smart money says this one will be decided in the championship rounds when Melan is an unknown quantity. How, or if, he can adapt to Bonnar’s pressure in deep waters could well be the deciding factor.

Barring the unlikely event of a draw – more on those later – Friday night’s co-main event will see a new Cage Warriors lightweight champion crowned. Either fan favourite Mehdi Ben Lakhdhar (5-0-1) or hotly-tipped rising star George Hardwick (8-1) will take home the strap that has launched the careers of Mason Jones, Conor McGregor and more. To say that there will be a lot on the line in York Hall would be a gross understatement.

If it feels like Ben Lakhdhar has been the lightweight heir apparent for some time, that’s because he has. Bursting onto the scene with a pair of violent stoppage wins in 2018, the Frenchman went on to compete in one of Cage Warriors’ all-time classics; a three-round slugfest against Joe McColgan. The blood and guts affair ended in a rare majority draw, but both men rightly emerged as winners in the eyes of both fans, and Cage Warriors. 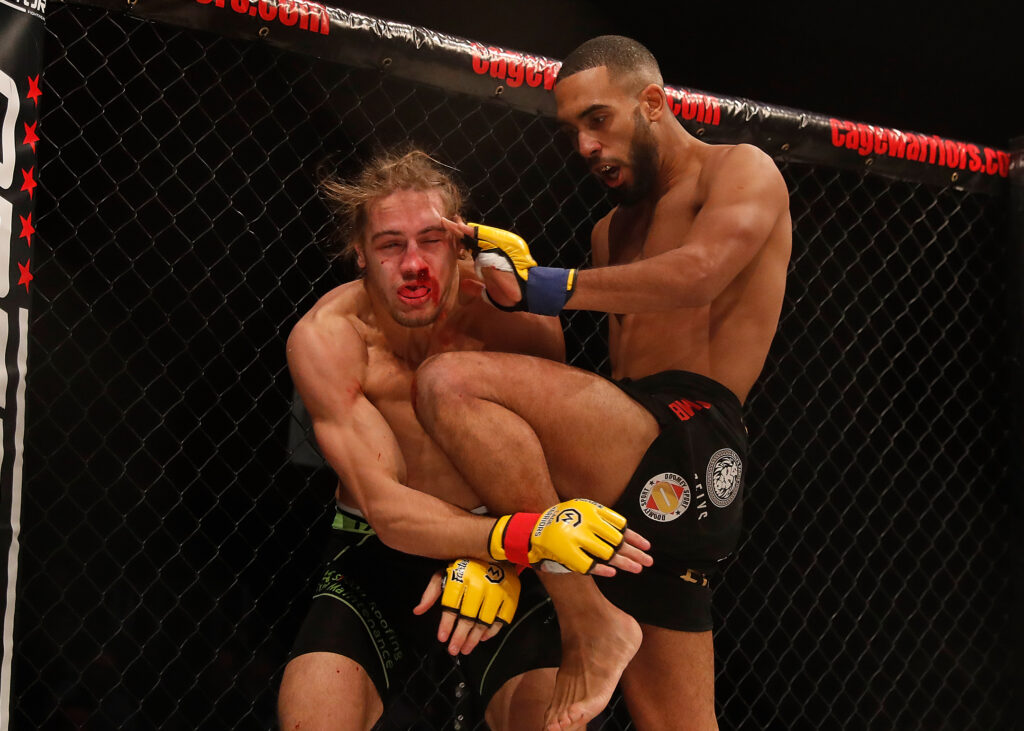 Unfortunately for ‘The Last Uchiwa’, fate has conspired to keep him out of the cage since. With mouth-watering bouts against Jack Grant and Paul Redmond falling through, and injury keeping him from a title shot against former champ Agi Sadari, Mehdi’s sole outing in the last two years was a first round stoppage of Stevie McIntosh. Still, it was the consummate MBL performance, with his patience, slick boxing, use of range and finishing instinct on full display. Exactly a year to the day removed from that stunning left hook finish, he’ll look to go one better and capture Cage Warriors gold.

Standing in MBL’s way on Friday night is another man currently carving a path through the 155lb division, Middlesbrough’s own George Hardwick. One half of the fighting Hardwick brothers, George has been near-flawless as a professional, with the sole blot in his copybook being a decision loss one division up to Cage Warriors mainstay Madars Fleminas.

Outside of that sole blemish Hardwick has looked like a serious force regardless of weight. Signature wins over Richard Kiely and Nicolo Soli prompted his return to Cage Warriors towards the tail-end of the Trilogy Era, with the 25-year-old showing exactly why he’s considered one of the best young prospects in Europe. 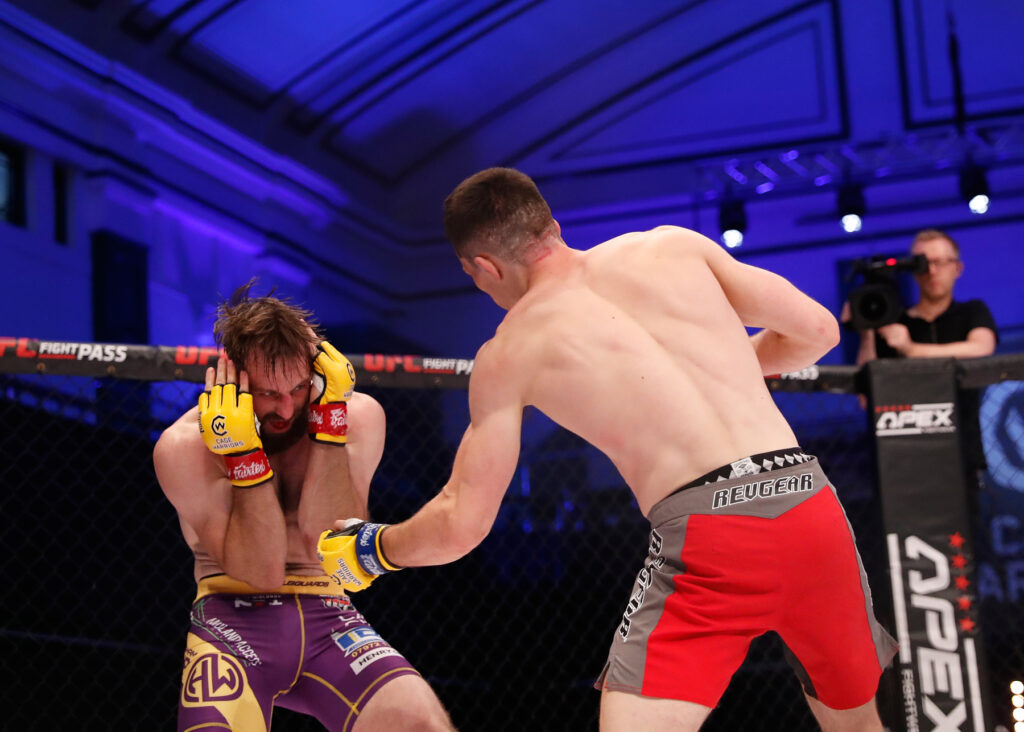 A rib-roasting body shot KO of former champion Dean Trueman opened his account in style, before Hardwick showed off another facet of his game, his favoured guillotine choke, against Karate stylist Jakub Dohnal at CW 129. With Joe McColgan vacating the lightweight title, the opportunity has knocked early for Hardwick as he meets undoubtedly his toughest test to date on Friday night.

A real coin toss contest between two men known for the clinical application of their own respective styles, this one could come down to which of the two can best adapt to their opponent on the night. Strap yourselves in, this one should be a thrill ride for the ages.

In a pivotal bout for both corners, Oban ‘Angel Eyes’ Elliot faces the always dangerous ‘Latvian Express’ Madars Fleminas. Elliot came back in from the cold of a brief retirement at the last Trilogy event, punching his way to a highlight-reel finish of George McMannus and dispelling any notion that he didn’t belong in the Cage Warriors welterweight division.

The Welshman, as entertaining outside of the cage as he is within it, takes a big step up in competition on Friday’s main card, looking to solve the riddle of Madars Fleminas. Known as one of the most awkward fighters to read, Fleminas has flummoxed countless opponents with his constant and unorthodox movement. 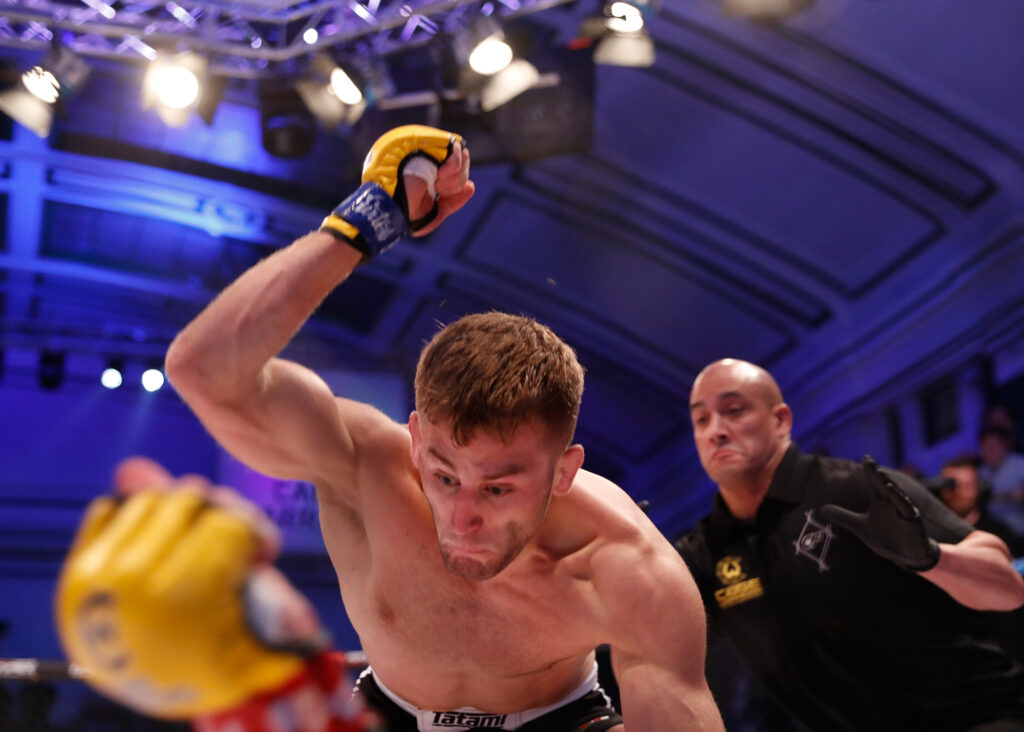 With wins over lightweight title challenger Hardwick and middleweight champion Matt Bonnar on his ledger, Fleminas is a force to be reckoned with at 170lbs. In the bout already dubbed ‘The People’s Main Event’ on social media, the winner – whoever that may be – will make a huge statement in the welterweight division.

Elsewhere on the card, fan-favourite Jean N’Doye returns to face Tom Mearns, who returns to Cage Warriors following a win at the CW Academy and a long-awaited drop to 145lbs. Liam Gittins faces Kingsley Crawford in the pick of the prelims, while a slew of undefeated prospects including Adam Cullen, Michael Tchamou, Luke Riley and Yuki Angdembe look to make their mark on Cage Warriors. 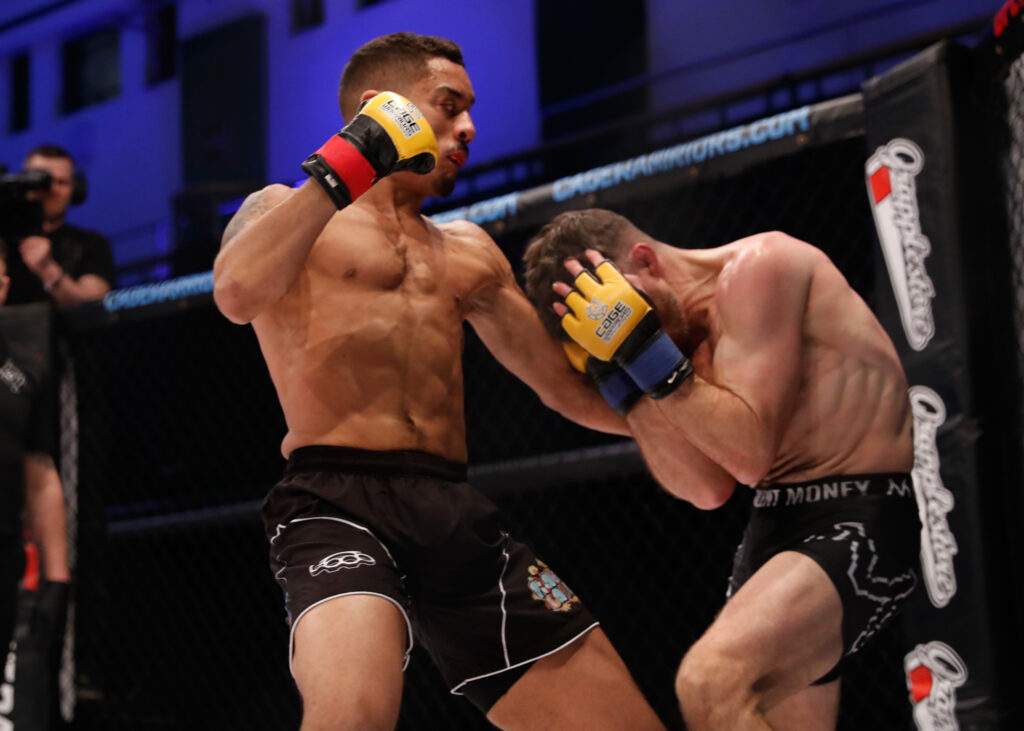 Join us this Friday night on UFC Fight Pass from 6:30pm and other global broadcast partners, as Cage Warriors ends the year in style with the first night of #DoubleTrouble, live from York Hall!

A limited number of tickets are still available for purchase here.