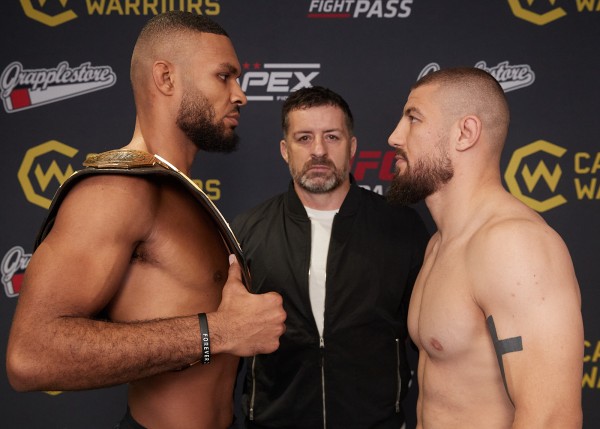 Cage Warriors 146 is set with two title bouts, after all four headliners made weight successfully on Friday morning in Manchester.

Middleweight sensation Christian Leroy Duncan (184.8lbs) came in a sliver under the championship limit for the first defence of his title, as did challenger Marian Dimitrov (184.9lbs).

Both men came in under the championship limit at 169.4lbs apiece.

Elsewhere on the card, the professional CW debut of Andrew ‘The Vice’ Clamp (201.1lbs) is set, as he faces California’s Chuck Campbell (203lbs).

Manny Akpan and Łukasz Kopera initially came in over the limit for the their respective light and featherweight bouts, before making weight in the allotted two hour window.

An illness has forced the cancellation of Liam Molloy’s featherweight bout with Orlando Wilson Prins.

Full weigh-in results for the main card and preliminary bouts – both of which stream live on UFC Fight Pass – can be found below, along with updated start times.