Thirteen months, fifteen events, five Trilogies. Titles were defended, champions were crowned, stars were born and new journeys began. In some of the most unique, challenging circumstances in recent history there was one constant in European MMA: Cage Warriors. These are just some of the Trilogy Tales.

Beast Mode
If you asked Matt ‘The Beast’ Bonner to sum up his start to 2020, he might have opted for “less than ideal”. Caught up in the chaos of the UK’s imminent first lockdown forcing Cage Warriors 113 behind closed doors, Bonner started the year dropping a decision to Jamie Richardson. With the uncertainty surrounding when people would be able to compete again, not to mention where his now 6-6-1 record would leave him in the middleweight pecking order, few could have predicted what would follow.

Never one to be deterred, Bonner was straight back into the fray as CW returned after six long months of lockdown with the first event of the Trilogy Era. As usual he wasn’t taking the easy route, stepping in with surging prospect George Smith. The SBG Manchester man was riding a five-fight winning streak including two on Cage Warriors; but anyone wondering whether Bonner would be happy settling for gatekeeper status would soon have food for thought.

After a typically strong start from the Judoka, Bonner’s superior cardio saw him take over in the third round, earning a dramatic come-from-behind stoppage. With the student vanquished it was time to take on the master, as Bonner returned at The Trilogy Strikes Back to face UKMMA stalwart, Matt Inman. The pair exchanged thudding shots for three frantically-paced rounds, and despite a late Inman rally, ‘The Beast’ once again had his arm raised.

A career-best performance against former champion James Webb at third Trilogy followed, earning the Next Generation man the title shot that had seemed so far out of reach just a year before. It was a wild, gritty affair against marauding champion Nathias Frederick, ending in dramatic fashion as the challenger made a slick transition to the champ’s back, securing a lightning-fast submission and adding his name to the honour roll of Cage Warriors champions.

Having fought on four consecutive Trilogy events, Bonner has taken a well-earned couple of months’ rest to recharge the batteries. The ‘Beast’ will return for his first defence at Double Trouble!

Sam-Urai Showdown
They say that the third time’s a charm; that’s something that must certainly ring true for Sam ‘Urai’ Creasey. A quintessential martial artist, Creasey has been one of Cage Warriors’ most consistent performers across the flyweight division over the last five years. Racking up impressive wins over a who’s who of European 125lb’ers, the only thing that had eluded him was the big gold belt.

The Bedfordshire man had twice contested the flyweight championship; despite strong starts on each occasion, the third round had been his undoing against both Nathan Greyson and Samir Faddine. Not one to be deterred Creasey hopped right back on the horse, picking up a nip-and-tuck points victory over Nicolas LeBlond and a third-round stoppage of Adam Amarasinghe in a back-and-forth affair.

Those victories put Creasey back in the hunt; more specifically they put him in the semi-finals of the CW flyweight tournament against newcomer Aaron Aby. After booking his ticket to the final with a takedown-heavy showcase, the ‘Sam-Urai’ was set for his third shot at the title on his biggest stage yet: The main event of the final Trilogy.

Where it had once been his undoing, on that fateful night the third round would provide Creasey with his moment in the sun. After a scrappy 13 minutes of action the bloodied-up veteran would stop former champion Luke Shanks with a tight Guillotine Choke to finally capture the biggest prize of his career. The controversy surrounding a possible early tap will see the pair meet again at Double Trouble, with Creasey looking to achieve another milestone as the first man ever to defend a Cage Warriors flyweight title.

Future Shock
If you had to pick a single fighter whose stock rose the most across the Trilogy Era, few would dismiss a finger pointed in Ian Garry’s direction. It was an epic journey that started with the young Dubliner as a 3-0 prospect with potential oozing from every pore, and ended with a world championship and a UFC contract. If ever there was a distillation of what Cage Warriors has come to stand for over the years, this was it.

Despite spending just shy of a year on the shelf following his break-out performance against Matt Figlak in Cork, Garry came out all guns blazing at the first Trilogy, scoring a highlight reel KO against George McManus. The Irishman followed it up with an equally impressive performance against Figlak teammate Lawrence Tracy at The Trilogy Strikes Back, earning a berth in the CW welterweight tournament for his efforts.

What followed was a sure-fire contender for one of the most spectacular head-kicks in Cage Warriors history, as ‘The Future’ wrapped his shin around the dome of UFC veteran Rostem Akman, sending him slumping to the mat like a puppet with its strings cut. Not even the turbulent and well-documented split from his team in the run up to the tournament final would curb Garry’s momentum and following an awkward but compelling five-rounder against Jack Grant, the then 23-year-old’s Cage Warriors journey was complete.

Brothers in Arms
Diaz, Nogueira, Rua, Miller, Overeem, Lauzon…MMA has had no shortage of brothers running riot over the years. The last 18 months have seen Cage Warriors get in on the action and just like waiting for a bus, two came along at once.

The Figlaks (Mateusz and Michal) and the Hardwicks (George and Harry) have been tearing it up in their respective divisions, racking up 11 wins in as many appearances between them. Of the four Mike has been the most active, notching up four wins against the likes of Oban Elliot and Kieran Lister.

Brother Matt follows close behind with three wins across the trilogy series, starting with a 75-second submission of Madars Fleminas and finishing with a TKO against the debuting Joachim Tollefsen. With records of 6-1 and 6-0 respectively, both will be looking to follow in the footsteps of Trojan Freefighters head coach Paul Sutherland in capturing Cage Warriors gold. 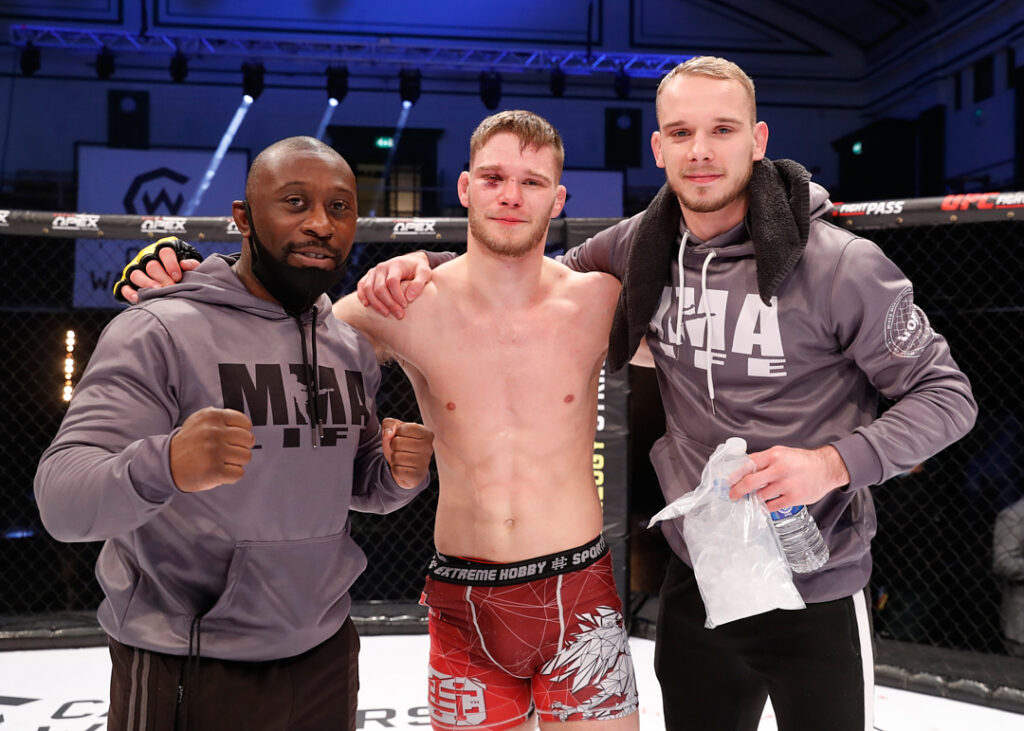 Not to be outdone, the Hardwicks crashed onto the Cage Warriors scene towards the tale-end of the Trilogy series, both quickly staking claims to a high rung on their respective division’s ladder. Featherweight Harry (8-3) drew feared striker Jean N’Doye in his debut, earning a well-fought split-decision win before out-pointing noted spoiler Konmon Deh at the final Trilogy.

Brother George endured a similar trial by fire, facing Dean Trueman out of the gate. Following a highlight-reel body-shot stoppage of the former champion and a second-round submission of Jakub Dohnal in his sophomore outing in the yellow gloves, Hardwick finds himself thrust into the spotlight at Double Trouble, where he faces Mehdi Ben Lakhdhar for the recently vacated lightweight title. 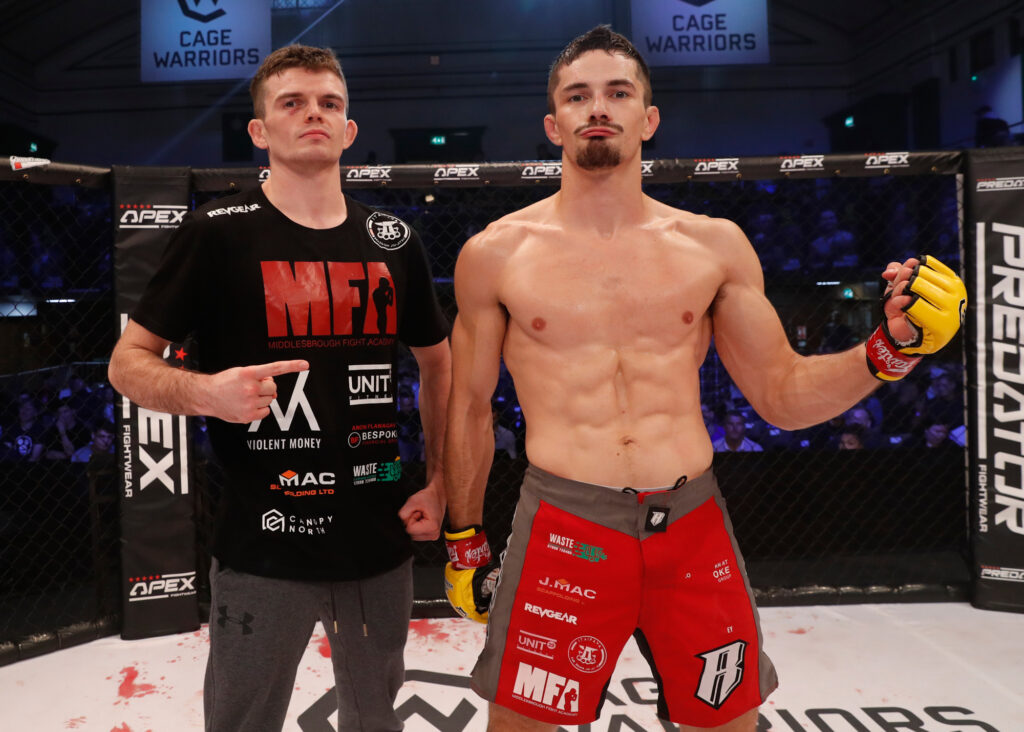 The Three Kings of Featherweight
One of the standout moments in recent European MMA took place during the fifth and final Trilogy, as fans returned to the iconic York Hall to witness one of the most emotionally-charged fights in Cage Warriors history: Paul Hughes vs Morgan Charriere. It was the ultimate thrill ride, dripping with drama from the walk-outs until the announcement of Hughes’ majority decision win. Yet as epic as it was in its own right, it was just one chapter in a tale that ran through the entire Trilogy Era.

2020 was supposed to be Morgan Charriere’s breakout year. Riding a wave of momentum and bolstered by news that MMA had finally been legalised in France, Morgan had designs on capturing the Cage Warriors featherweight title and defending it on home soil later that year. Fate had other plans, as travel restrictions prevented Darko Bancovic from making their scheduled title fight in March, before disaster struck at the first Trilogy. When one of Charriere’s cornermen tested positive for Covid-19, not only was his bout against Max Coga scrapped, the Frenchman and his crew were forced to quarantine in a UK hotel for ten days to add salt to the wound.

‘The Last Pirate’ would eventually capture his treasure, ending a year of frustration on a high note with a rib-roasting body-shot KO against Perry Goodwin at The Trilogy Strikes Back. Little did he know at the time, but another bout on that card would play a pivotal role in his immediate future… 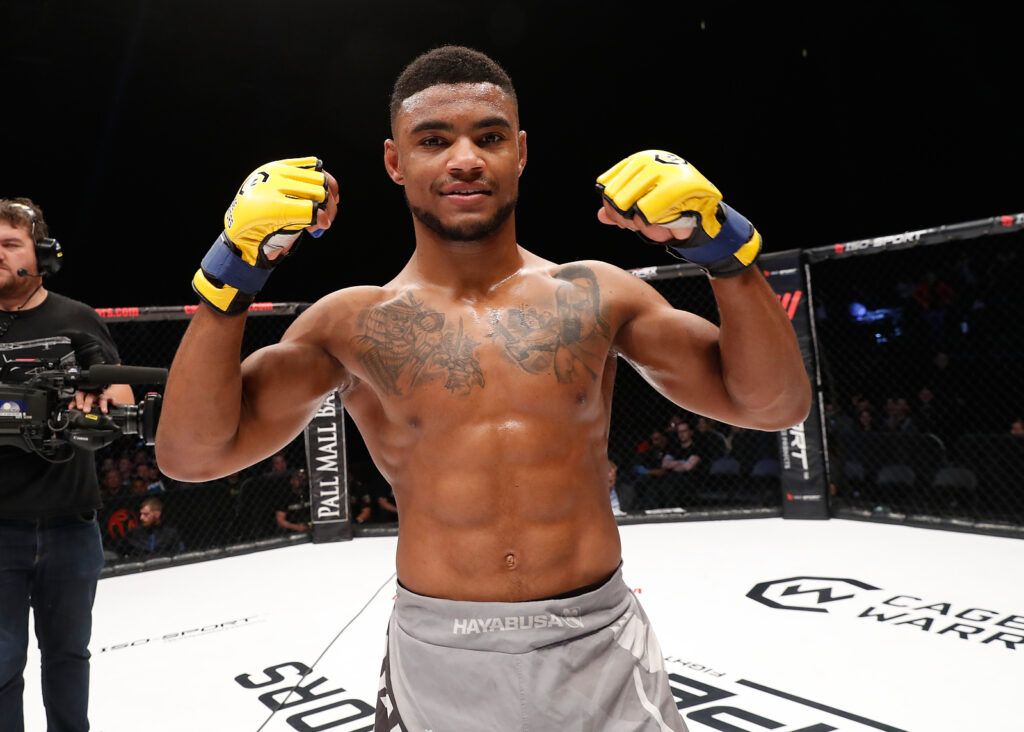 Stealing the show on the final night of The Trilogy Strikes Back were Paul Hughes and Jordan Vucenic; two of the hottest prospects in European MMA. The pair fought tooth and nail over three agonisingly close rounds, splitting the judges as Vucenic was crowned the victor. The Englishman would meet Charriere just three months later and despite entering the bout as the betting underdog, would end ‘The Last Pirate’s reign before it had properly begun. 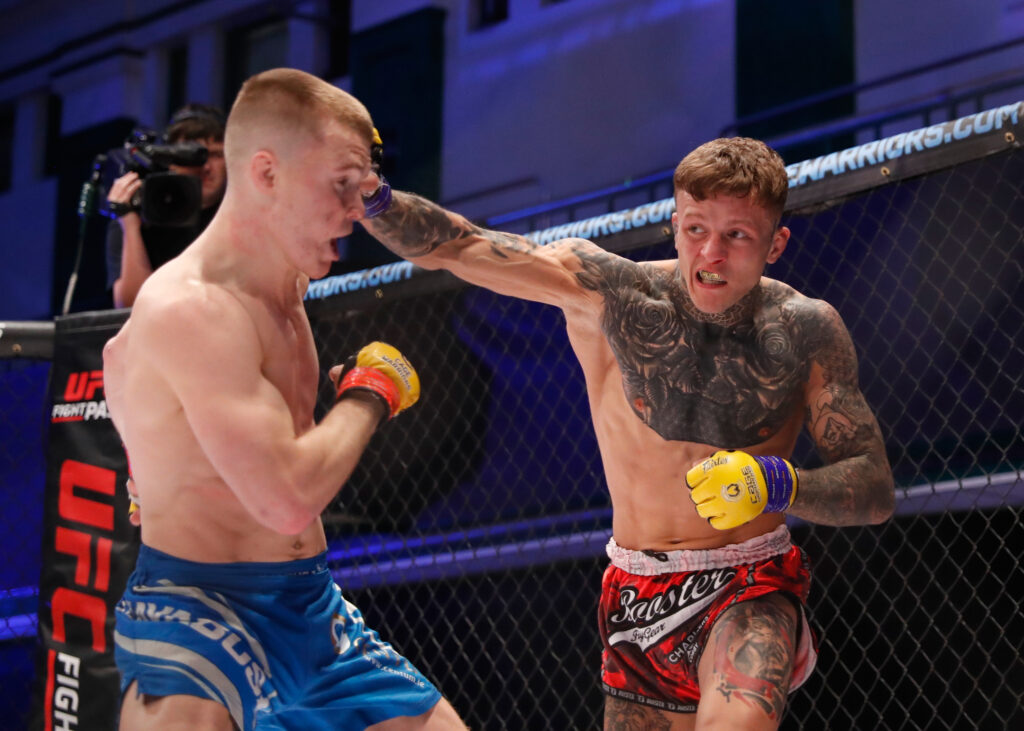 Hughes, meanwhile, had jumped right back in at the deep end, taking a unanimous decision just two days earlier over fellow surging prospect James Hendin. It seemed that the stage was set for an epic rematch over five rounds, but a hand injury would keep ‘The Epidemic’ side-lined for the remainder of 2021.

With Hughes gunning for a fight and Charriere desperate to get back in the mix, we were treated to an all time classic between the pair at the final Trilogy. With Hughes and Vucenic having unfinished business and Charriere leading the pack of hungry contenders, something tells us that this tale will have a few more chapters to be written beyond the Trilogy Era.

The Trilogy Era may be over, but all roads lead back to London for one final weekend of action before Cage Warriors embarks on what looks set to be its biggest year yet in 2022. With champions to crown, titles to be defended and countless more tales to tell, the next chapter begins on December 10th at Double Trouble!

Brad Wharton is Cage Warriors’ play-by-play announcer and can be found on Twitter, @MMABrad48.