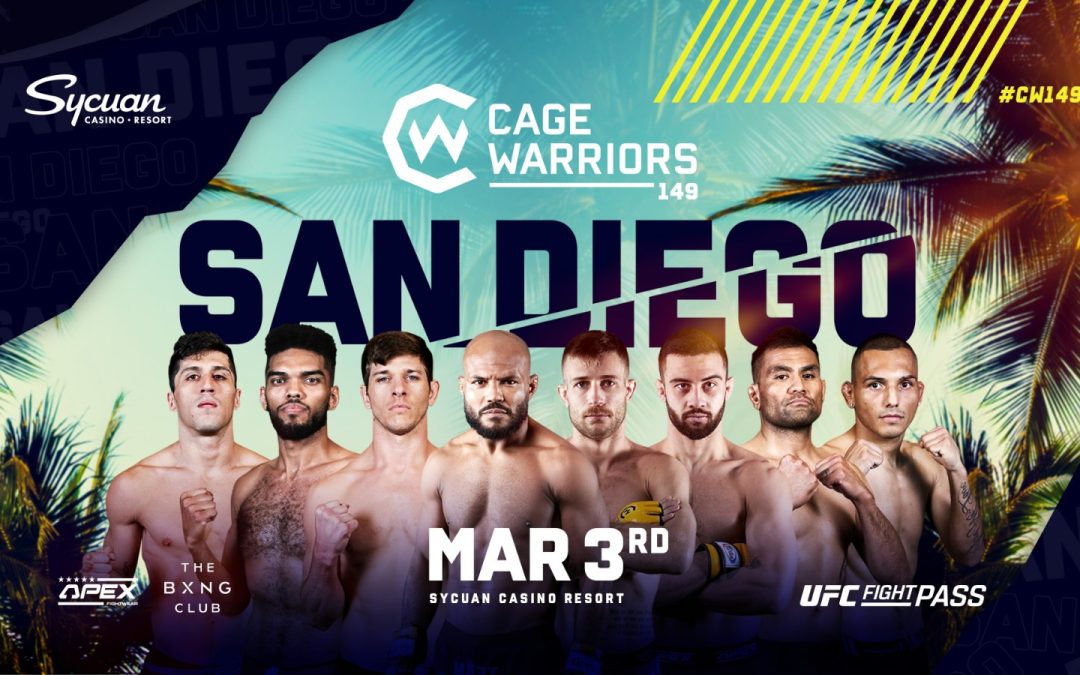 Cage Warriors – Europe’s Leading MMA Organisation – has revealed the initial batch of fighters for the first show of their 2023 world tour.

In addition, CW is proud to announce a four-event partnership with the Sycuan Casino Resort, which will see the illustrious venue become the exclusive US home of Cage Warriors in 2023.

Following CW 149 on March 3rd, the promotion will return to the Sycuan on June 2nd, September 8th and December 15th.

The grappling phenom is currently on a two-fight winning streak with CW, most recently earning a hard-fought points victory over Tuomas Gronvall at CW 148 on New Year’s Eve.

A training partner of UFC sensation Paddy ‘The Baddy’ Pimblett, Blair is coming off a blistering 12-second KO victory in his previous bout and is ready to put on a show on home turf.

Fresh from representing Team USA at CW 148, crowd favourite Damon ‘The Nomad’ Wilson (5-1) will be seeking to bounce back from his first professional defeat.

Roberto Hernandez (5-1) will be looking for his third consecutive CW win, while local fighters Elijah Harris (4-2), Jamey Lynch (5-3) and Bill Wilson (1-1) will also feature on the bill.

“This year we’ll be joining force with Sycuan Casino Resort, making them the official US home of Cage Warriors in 2023…” said CW President Graham Boylan.

“It’s a partnership that will give fight-fans an unrivalled fight-week experience.”

“We intend to kick-off the world tour in style, with an incredible venue and a fight card to match. Cage Warriors is at the forefront of So-Cal MMA, and you’re going to see exactly why on March 3rd!”

“We are thrilled to be the exclusive US partner of Cage Warriors in 2023,” said Rob Cinelli, general manager at Sycuan Casino Resort.

“San Diego is a hotspot for mixed martial arts, as there is a large fighting community, world-class gyms and many combat sports enthusiasts who call San Diego home.

“We are excited to bring four action-packed events to Sycuan, so dedicated fans and those newly introduced to combat sports can come and experience this massively entertaining sport first-hand.”

Tickets are available via CageWarriors.com, with the entire event streaming live on UFC Fight Pass and international broadcast partners.

Sycuan Casino Resort began as a humble Bingo Palace in 1983. Now more than 39 years later, it has
become a community landmark and one of San Diego’s premier casino and resort destinations.

Guests can enjoy a wide range of onsite amenities including a variety of restaurants and bars from fast-casual to fine dining, meeting and event space, a full-service spa, fitness center and a state-of-the-art outdoor pool deck with two pools, a lazy river and swim-up
bar.

Sycuan also boasts an expansive casino floor with more than 2,300 slot machines and 54 table
games in a variety of gaming options. Sycuan is open 24 hours a day, seven days a week.