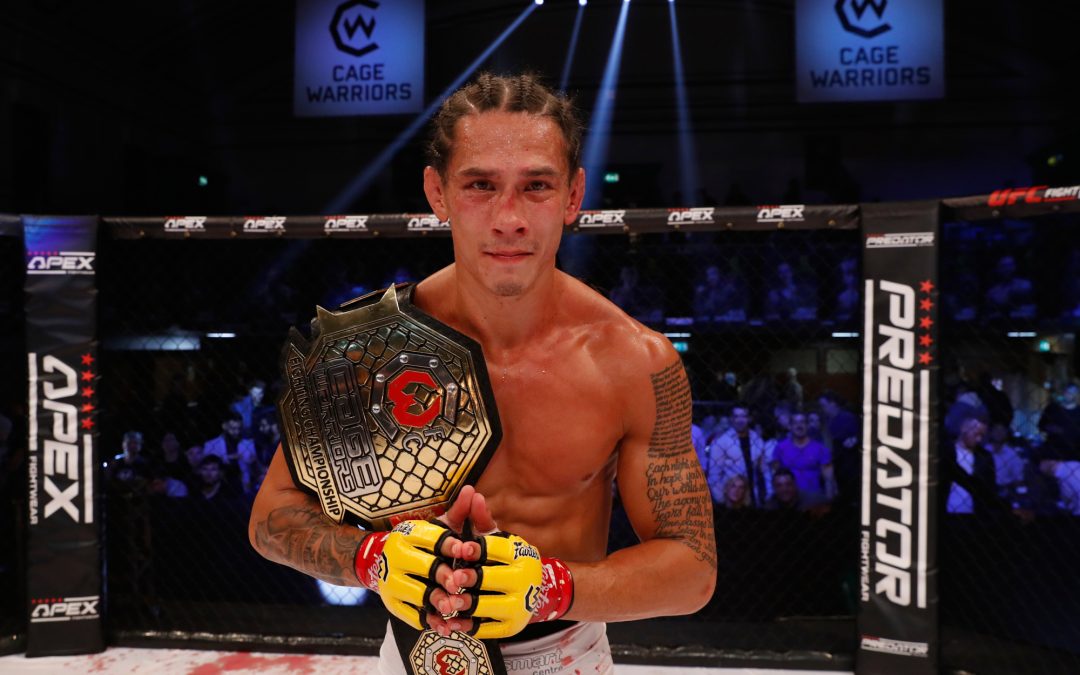 Hot on the heels of our 20th anniversary celebrations and just six weeks ahead of an impending return to California, Cage Warriors’ Summer of Fun continues this week as we head to Wales for the first time since 2019.

With current and former champions – and challengers – on a card packed with CW fan favourites, Saturday’s event brings elite European MMA to the valleys for the very first time. Here’s what’s in store…

In a sport that can take you from the highest of highs to the lowest of lows and back again in an instant, to say that it’s been a rollercoaster year for flyweight champion Sam ‘Urai’ Creasey would be an understatement.

After putting together a career-best run against the likes of Nic Leblond, Adam Amarasinghe and Aaron Aby, Creasey won the Cage Warriors flyweight tournament and, with it, the 125-pound title that had been vacated by his occasional training partner Jake Hadley. It was a Cinderella Man moment for the Leighton Buzzard man; having fallen just short in two previous title bouts, the third time proved to be a charm.

Unfortunately the bout wasn’t without incident. Firstly, fellow challenger Luke Shanks missed weight, before the contest itself drew controversy around a ‘phantom tap’ from the eventual winner. Creasey would go on to stop Shanks in the third round, but a do-over was inevitable. Shanks would gain a measure of revenge with his first-round victory, but having missed weight again, the belt remained in Bedfordshire.

This left Creasey in an unenviable position; a champion coming off a loss. A true, lifelong martial artist, the Sam-Urai was keen to cement his status and his honour within the cage as soon as possible.

Set to meet Italian super-prospect Dylan Hazan at CW141 just weeks ago, fate conspired against him once again, with the Italian being unable to make championship weight. This time following his head rather than his heart, Creasey opted against another non-title bout.

Thankfully he wouldn’t have long to wait for Cage Warriors to source a new challenger. In Saturday’s main event, the champion will look to secure his 16th professional victory and first title defence against German-based Croatian Stipe Brčić.

Brčić, fighting out of Dusseldorf’s vaunted UDF gym, is considered among his adoptive country’s most promising prospects in the lighter weight classes. Ranked #1 at 125lbs and 135lbs in Germany (records keepers Tapology have him ranked as the #1 flyweight and #3 bantamweight in the entire Western European region), Brčić has been flying the flag for the notion that you don’t mess with Croatians called ‘Stipe’.

With the sole blot in his copybook in three and a half years coming as the result of an injury, and entering his fighting prime at 29 years of age, Brčić no doubt feels that his time is now. A fortuitous opportunity has fallen into his lap; all that remains is the small matter of capitalising on it.

With wins over the likes of Nuno Costa, Oemer Cankardesler and former Cage Warriors title challenger Luca Iovine already under his belt, Brčić will aim to announce himself to the MMA world as the new Croatian Sensation in this weekend’s marquee bout.

For the champion too, there is more at stake than a simple win or loss on the ledger. Nobody will ever question his credentials, but victory against a promotional newcomer will certify Sam Creasey as one of Cage Warriors’ most decorated veterans.

May the best man win.

It’s a general rule to live by, and one that the Cage Warriors roster is going to have to come to terms with if Oban Elliott has any say in the matter. He’s been counted out before just a few short years into his professional career, only to come back and haunt subsequent opponents.

With a great team behind him and the talent and charisma to be a star for years to come in Cage Warriors, ‘The Welsh Gangster’ also has a familial legacy in combat sports that he intends to continue.

In one of the most highly-anticipated bouts on Saturday’s main card, he’ll be facing another man on a mission in Matt Bonner. A former champion at 185lbs, Bonner’s reign after dethroning Nathias Frederick was brief, but ‘The Beast’ already has his sights set on the welterweight gold currently held by Rhye McKee.

Following a pair of back-to-back submission victories at catchweights between divisions, Bonner makes his return to welterweight proper for the first time since February 2019.

Adding further fuel to the fire is the fact that both Bonner and Elliott’s last losses at 170lbs came at the hands of the surging Madars Fleminas; the chance to move forward and settle the score will no doubt serve as extra motivation should either man need it.

Motivation is not something this pairing have historically lacked though. With Elliott consistently seeking out the toughest competition available and Bonner jumping at the chance to get another fight in before Cage Warriors returns to Manchester later this year, the stage is set for an incredible battle of skills and wills.

If you don’t know, now you know

As any regular viewer of the black and yellow brand will tell you, Cage Warriors doesn’t do two-fight cards and Saturday is no exception. With the flyweight title on the line in the main event, a pair of 125-pound contenders in the form of Aaron Aby and Michelangelo Lupoli are set to meet in a featured bout that could go some way to deciding who gets next dibs on the winner.

Wrexham’s Aby, sporting only a single loss in his previous eight outings, is on a career-best run. After outpointing former champion Samir Faiddine last year, and stopping the lethal former bantamweight title challenger Gerardo Fanny in April, Aby will be looking for the opportunity to avenge that single recent blemish – to champion Sam Creasey – at the expense of newcomer Lupoli.

A dynamic young veteran from Italy, Lupoli will be faced with both the greatest challenge and opportunity of his career when the cage door closes and he has Aby in his sights. There are no secrets here: Cage Warriors heads to Rome in October and Lupoli expects to be featured prominently on that card. He’ll be able to earn that opportunity by upsetting the applecart and throwing his hat into the title picture come Saturday.

It wouldn’t be a Cage Warriors card in Wales without the man who has become synonymous with yellow gloves and absolute bangers making an appearance, so naturally ‘The Crazy Horse’ will be putting in a shift on the main card in his home nation.

Former title challenger Josh Reed might just be the best ‘value for money’ fighter on the entire Cage Warriors roster, so expect his pairing with fellow ‘do or die’ battler Bogdan Barbu to be nothing if not a high-octane affair.

CW142 also sees the long-awaited Cage Warriors debut of Chris Bungard. When he’s not dishing out piledrivers in the pro-wrestling ring, ‘The Bad Guy’ is squeezing necks in the cage.

Returning to action after a year away from the sport, Bungard faces Brazillian veteran Erick da Silva. A former contestant on The Ultimate Fighter: Brazil, ‘Indio Brabo’ will also be looking to open his Cage Warriors account in style.

With each man sporting 14 finishes on their lengthy records, odds are that one of them will have an extra notch in that column before the week is out.

All the action from Ebbw Vale goes down live on UFC Fight Pass this Saturday evening. Tickets are available from Eventim.