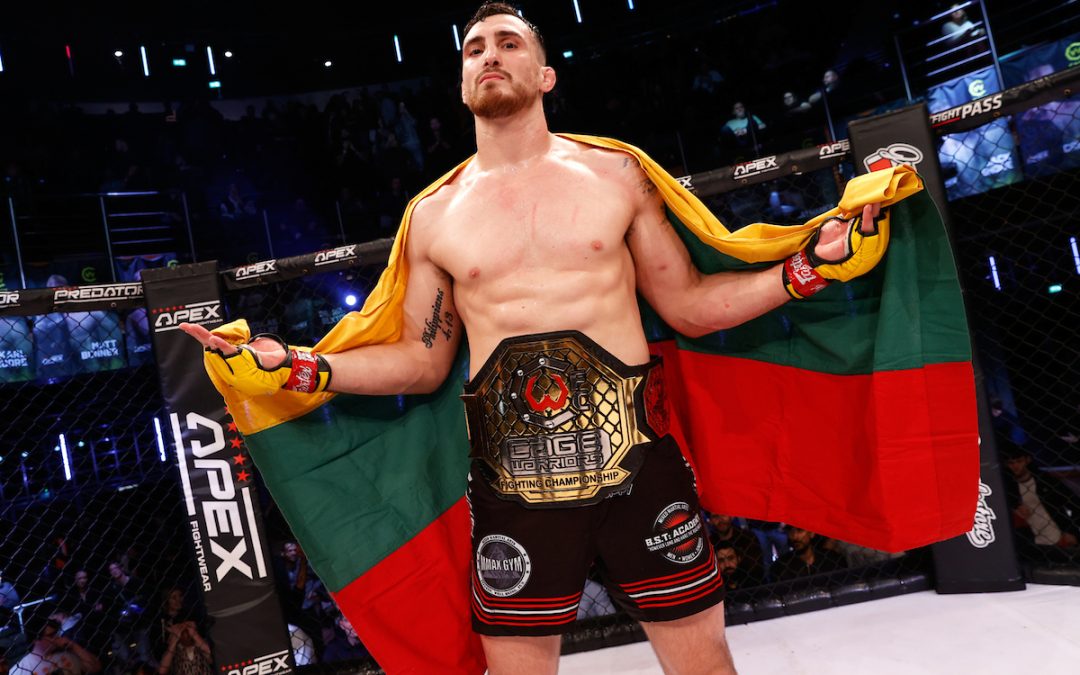 Cage Warriors promised to close the year with a show to remember and when the dust had settled on CW148, the event had delivered in spades.

With Team Europe edging out Team USA in the battle for trans-Atlantic supremacy and a pair of shocking finishes in two world title bouts, Play-by-Play Comentator Brad Wharton takes a look back at some of the biggest moments from New Year’s Eve.

The Title Fight That Never Was

Nobody will ever accuse Jesse Taylor of having an uneventful life.

Returning to the promotion after ten years in a bid to reclaim the title he never lost was wild enough, but nobody could have foreseen the series of events that left him unable to compete in CW 148’s main event.

Thankfully ‘JT$’ wasn’t seriously hurt and on behalf of everyone at Cage Warriors we wish him a speedy recovery…but there was one final twist in the tale.

Who better to reveal it than the man himself?

“At this time, I think we’ve made a decision…” said Duncan, “…I’ll be handing this belt back to Cage Warriors and then next year, 2023, London in March, it’s going to be my UFC debut!”

Duncan has, for years, exemplified what Cage Warriors is all about.

From early fights on amateur undercards, to the IMMAFs and the CW Academy Grand Prix, to a steady increase in the level of opposition en route to the middleweight title and now the world’s ultimate proving ground; CLD is the poster child for the pathway to success.

It’s been a genuine honour to call his fights over the years, I just hope the UFC middleweight division is ready for the human highlight reel.

An exceptional talent dating back to his early CW tenure, Shaj Haque probably didn’t anticipate waiting until 2022 to lift the Big Gold Belt.

In many ways, his long-awaited rematch with Sam Creasey played out with story beats emblematic of his career since their first meeting; it wasn’t all plain sailing and he had to pick himself up a few times, but it was all worth it in the end.

The bout itself was a three round thriller between two men far more evenly matched than their initial meeting.

To use a cliché, it really was a game of inches and as time ticked away in the third, the champion was pulling ahead.

But then, as so often is the case in this bubble of beautiful chaos we call MMA, lightning struck for Haque and the bout was over in an instant.

Creasey will, as we know, return to fight another day, but Saturday night belonged to the new champion.

It’s been a long and winding road for the South Shields fighter, but going down in history as the first Bangladeshi-born MMA world champion is a juice that was surely worth the squeeze.

So Nice, He Did it Twice

Second time’s the charm, or so they say.

Modestas Bukauskas must certainly feel that way after letting off one of the first fireworks on New Year’s Eve, a thunderous right hand to the jaw of Chuck Campbell.

After a tentative first fifteen minutes, ‘The Baltic Gladiator’ made good on his promise to let his hands go, leaving his opponent slumped face down on the canvas.

The now two-time champ had his heart firmly on his sleeve as he vaulted the cage wall to take a well-deserved bow before the London crowd: Mission accomplished.

Bukauskas’ title win was steeped in even more drama, given that it decided the best of five series between Team Europe and Team USA.

Chasen Blair had put the US side ahead with a stunning twelve second KO to kick proceedings off.

It looked like the Americans were going to run away with things as Justin Barry got off to a great start against Dario Belandi, but the Italian pulled it back to even the score before Tobias Harila’s second-round TKO put Team Europe in front.

A workmanlike performance from Wilson Reis tied things up at 2-2 going into the main event, putting the CW bantamweight division on notice in the process, before the new light heavyweight champ sealed the deal.

Don’t Call it a Comeback…

Speaking of bantamweights, Nathan Fletcher made a long-overdue return to action in the yellow gloves with his unanimous decision victory over top italian prospect Alessandro Geordano.

The former title challenger holds wins over champion Michele Martignoni and (at amateur) Caolan Loughran; with Reis and others also in the mix, 2023 could be another big year for the 135lb division.

Darren Stewart picked up a much needed win in his return to the cage, surviving an early armbar attempt from fifty-fight veteran Guilherme Cadena to score a brutal first round TKO.

It marked a return to form for The Dentist, who has endured a frustrating few years inside and outside of the cage.

Cage Warriors will return after a short break on March 3rd in San Diego, kicking off a new world tour with a month of mouth-watering cards on both sides of the Atlantic!