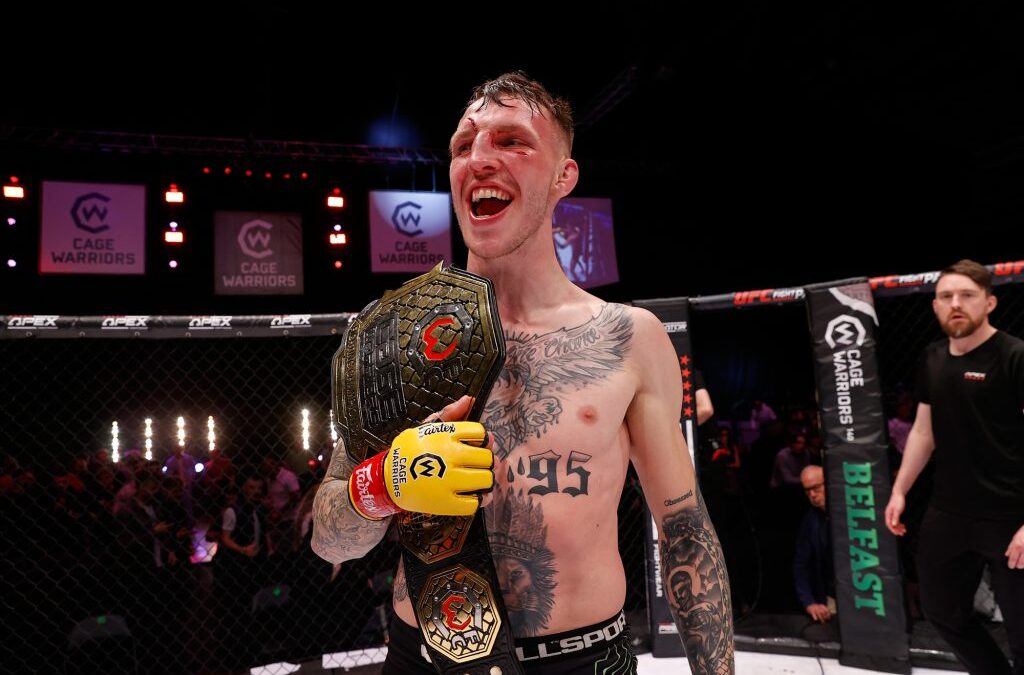 Getting the opportunity to call fights for Cage Warriors is the best and worst thing that has ever happened to me.

The best, because over the last 10 years I’ve sat mere feet away from Conor McGregor fighting at the Helix, Paddy Pimblett at the Echo, Nathaniel Wood at the O2 and Jack Shore at the Ice Arena.

The worst, because for all those occasions and more, part of me would rather have been a few feet back, drinking in the pure, unfiltered magic of what was happening in the crowd.

‘Eleven Minutes of Magic’ is a huge under-exaggeration; the magic in Belfast started long before the first bell of Rhys McKee and Justin Burlinson’s title fight – and continued for some time after referee Dan Movahedi called a stop to proceedings early in the third round.

The audience for Cage Warriors’ first appearance in Northern Ireland arrived early, in large numbers and high spirits. Not that they needed any warming up, but after the three crazy stoppages and a fifteen-minute war between Scott Malone and Michele Martignoni on the preliminary card, the SSE Arena was at fever pitch.

By the time County Tyrone’s Caolan Loughran made his cage walk, there was no doubt that June 25th was something special, even by Cage Warriors’ high standards.

As commentators, we wear noise-cancelling headphones that allow us to hear each other, producers and directors over the noise of the crowd, but I’m not afraid to admit that every now and again I commit the cardinal sin of slipping them off to get a taste of the atmosphere.

I’d taken them off for Loughran’s walkout and announcement, and did so again for the reaction as he dispatched fellow super-prospect Festus Ahorlu in the second round. ‘Deafening’ doesn’t do it justice; suffice to say that the 26-year-old undefeated bantamweight had put on what was a star-making performance and the crowd reacted in kind.

What followed was the almost prerequisite fight night rendition of Sweet Caroline, and while some might say it’s overplayed, the Belfast crowd belted out verse and chorus with gusto as Loughran strode back through them to make way for our main event. It was tough to imagine how they’d get any louder.

From the moment he stepped through the curtain, it was clear that the 25-year-old Sunderland man was set to play the villain of the piece, even if it was only in pantomime.

There had been no pre-fight ill will between Burlinson and the home favourite; this was a bout underpinned by respect rather than bad blood. When you fight a man 30 minutes from his own front door though, a chorus of boos comes with the territory.

The outpouring of love as local boy McKee entered the arena was incredible by contrast. It’s a cliché to say that you had to be there, but if there was a way to bottle the energy in the room as MC Hywel Chaplin whipped up the thousands in attendance in the moments before the main event, one sip would make you a Cage Warriors convert for life.

The eleven minutes of magic that followed had a little bit of everything that makes this sport great. I’m not talking about the grappling, striking, wrestling, strength and conditioning (although it did have all of those in spades), I’m talking about the intangibles: the heart, the suspense, the drama and the emotion.

The welterweight championship hopefuls went for one another at a blistering pace, so much so that it was obvious from the outset that this would end up as much a battle of will as one of skill.

McKee used every inch of his six-foot-three frame to rattle off shots from a distance, unsheathing sharp elbows and uppercuts when Burlinson got in close. His opponent gave as good as he got, snapping McKee’s head back with powerful punches before eventually securing a sought-after takedown.

Ordinarily you’d have expected this to suck the atmosphere out of the room, but even as the referee called for McKee to defend himself from Burlinson’s potentially fight ending ground ‘n’ pound, the SSE Arena became more resolute and their volume greater. ‘Skeletor’ had survived the round, but he wasn’t out of the woods just yet.

A huge elbow had cleaved open the 26-year-old’s forehead, and despite some sterling work from the cutwoman between rounds, there were a few dicey moments as the doctor was called in to inspect the injury. The crowd waited with baited breath as Burlinson snarled from the opposite side of the cage, chomping at the bit to get to grips with McKee for a second time. The bout would continue, but for how long?

Burlinson, also wearing significant battle damage, tore across the cage to take his man back to the mat in the second frame. This time he attacked with knee bars and ankle locks, once again forcing McKee into survival mode. Just as the fight seemed to be slipping through his fingers, the Ballymena man was able to turn the tide, scrambling to top position and rocking his opponent with a series of sledgehammer-like punches.

It was Burlinson’s turn to receive a warning to improve his position, and as the round came to a close it was his badly swollen left eye that required a doctor’s check. The momentum had shifted once again and as the bell for the third round rang, it was evident that we were witnessing an all-time classic.

The first ten minutes had conditioned us to expect the unexpected, but nobody was ready for what happened in the eleventh.

Staggered by a stiff left hand, Burlinson span into an elbow strike that fell just inches wide of the mark. The crowd had barely had chance to catch their breath as McKee slipped out of the danger zone uncorked a pair of thunderous shots that folded his man against the cage.

And just like that, the eleven minutes of magic were over.

As the arena air was filled with joy, relief and half empty pints, McKee leapt the barrier to be held aloft among a sea of adoring fans. Like Paddy at the Echo, McGregor at the Helix, Dalby at the KB Hallen and Wood at the O2, it was a moment that will be talked about in European MMA circles for years to come – and rightly so. Burlinson’s contribution will no doubt be just as big a part of the conversation.

They say magic is never as impressive on the second viewing. Fire up UFC Fight Pass and you’ll find that McKee versus Burlinson is just the latest in a long library of Cage Warriors fights that say otherwise.

We’ve been making these moments for 20 years; next month at Cage Warriors 141 in London we’ll celebrate that fact the only way we know how.

By making some more.