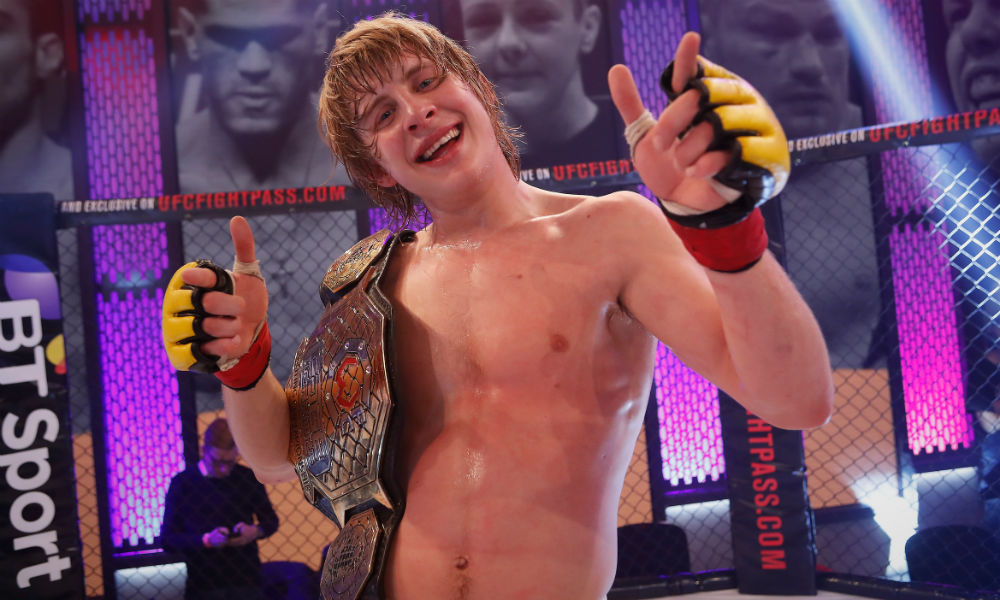 For over twenty years, the famous yellow gloves have been strapped on by some of the best and biggest names in the game.

Few come bigger than Liverpool’s own Paddy ‘The Baddy’ Pimblett.

Known as much for his fever-pitch walkouts, flowing locks and no-filter interviews as he is for his exploits in the cage, Pimblett is a genuine generational star, and it all started on Cage Warriors.

In honour of his first-ever UFC Pay-Per-View event, let us take you on a trip down memory lane with Paddy The Baddy’s Top 5 CW Moments!

Any time a fighter has a break from competition – especially after a severe injury and surgery – there are serious questions to be asked.

How well did they heal? Is there any ring rust? Do they still want it?

Paddy answered all three of those questions, and more, when he returned after 18 months on the sidelines to face heavy-handed prospect, Decky Dalton.

Pouncing on an early slip from the Irishman, ‘The Baddy’ showed that MMA is a game of mere inches, zeroing in on Decky’s neck like Dracula on a thick and juicy vein.

By the time Paddy had the back it was a foregone conclusion, with the TKO victory coming less than three minutes into the very first round.

It was the first time that a young Paddy Pimblett would set foot in Liverpool’s Echo Arena, a venue that would become so pivotal to his career.

Little did he know, his actions that night would be one of his biggest steps yet towards superstardom.

His opponent that night, Conrad Hayes, was a scrapper; tough as they come and – like Paddy – a potential star on the rise.

We’d all heard the rumours of ‘The Baddy’s famous flying triangles, but seeing it in action during a professional MMA fight for the first time was a moment few would forget!

The comeback is bigger than the setback, as the saying goes.

Following the agony of his defeat at the hands of Nad Narimani ten months earlier, Paddy returned to the scene of the crime for a do-or-die bout against highly-touted European contender Alexis Savidis.

7-1-1 in his previous nine bouts and having not been finished since being submitted by Paul Redmond in 2012, Savidis wasn’t there to make up the numbers.

The Furious Kid and ‘The Baddy’ went at it hammer and tongues for the first five minutes, but with any pre-fight nerves set aside and The Echo Arena behind him, Paddy was about to turn up the temperature.

Another flying triangle, this time switched into a triangle armbar, set the Liverpool crowd alight.

Paddy vaulted the cage to celebrate with his friends, who literally brought the cageside barriers down with their reaction to his fight-ending submission…the camera didn’t catch it, but they also helped put them back together!

Conor McGregor may have gone on to become the biggest star in the sport, but there has never been a bigger star in Cage Warriors than Paddy The Baddy.

So much so, that one of his biggest and most viral moments wasn’t even a fight…it was *that* walkout.

Just like any ‘fire in a bottle’ moment, there were a myriad of factors in play and it wouldn’t have been quite the same without any of them.

First, there was the packed Echo Arena; the venue that Paddy had turned into a fortress over the years, packing it out on multiple occasions while his image graced a huge billboard in Liverpool’s city centre.

The final ingredient? The infectious charisma of the man himself.

It was a truly organic moment, one that will often be imitated, but never replicated.

It’s back to where else but The Echo Area for our final entry; the night The Baddy became the champ.

Despite a number of roadblocks along the way, including a last-minute change of opponent, September 16th, 2016 was the night that years of hard work paid off for one of Liverpool’s favourite fighting sons.

With teammates Dylan McLoughlin and Ellis Hampson already picking up big wins and Chris Fishgold set to challenge for the title in CW 78’s main event, all eyes were on Paddy to maintain the momentum for Next Generation against French veteran Johnny Frachey.

It was also a night where we saw the evolution of The Baddy; no longer just a dazzling submission specialist, but a savvy striker too.

With a big knee and a right hand, Frachey hit the deck, the fans hit the ceiling and Paddy hit the record books as the new Cage Warriors featherweight champion.

You can check out more of The Baddy’s greatest hit on the Cage Warriors Youtube channel, and if that classic walkout music has got you in the mood for a house party, why not follow us on Spotify?

All the action starts with preliminary bouts on UFC Fight Pass!

Missed The Baddy’s rise in Cage Warriors? Tickets to see the next generation of superstars, including Paddy’s teammate Nathan Fletcher, at CW 148 are available now!