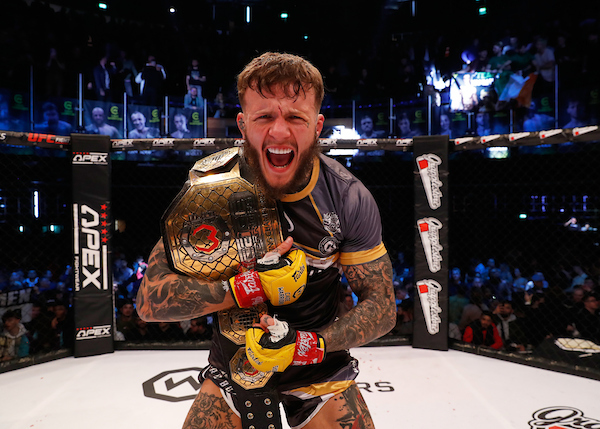 2022 has been another huge year for Cage Warriors, with several landmark events and a huge 20th anniversary celebration.

With the year coming to a close there are no signs of slowing down; the final months of 2022 are set to feature no fewer than four massive fight cards from Europe’s leading MMA promotion.

First up, CW 145 returns to the scene of the 20th birthday bash, with the biggest rematch in CW history set to go down on November 4th!

Vucenic’s hand was raised that night in the iconic York Hall, but given the razor-thin nature of the judge’s decision and the fact that Hughes went on to capture interim gold in Vucenic’s absence, a rematch was written in the stars.

Two men will enter wearing Cage Warriors gold, but only one will leave as the undisputed champion!

Elsewhere on the card, former light heavyweight champion Modestas Bukauskas returns to Cage Warriors following a stint in the UFC.

Another former middleweight champ, James Webb, looks to get back to winning ways against Paddy McCorry, while the undefeated Caolan Loughran and former flyweight champion Luke Shanks duke it out for bantamweight bragging rights.

Remaining tickets are available via CageWarriors.com

Just eight days later, Cage Warriors hits Manchester for CW 146 with a double-bill of title fights and some of the hottest up-and-comers on the roster set to strap on the famous yellow gloves.

Unbeaten phenom Christian Leroy Duncan will make the first defence of his newly won Cage Warriors middleweight title in the evening’s main event, looking to reaffirm his status as one of European MMA’s elite.

He’ll face the threat of another of Europe’s finest, the debuting Sambo specialist Marian Dimitrov.

Riding a 10-fight winning streak into his CW debut, the Bulgarian bruiser is aiming to turn the middleweight division on its head and add another name to his formidable hit list!

Interim gold will be on the line in an old-school versus new-school clash between the UK MMA stalwart and the young and hungry Mateusz Figlak.

Also on the bill, Aaron Aby returns to face recent title challenger Stipe Brčić in a bout with serious implications for the flyweight division.

Last remaining tickets for the event at Manchester’s BEC Arena are available here.

Completing an epic run of three shows in three weeks, Cage Warriors presents the latest edition of its Unplugged series from the BT Sport studios on November 20th.

The special invite-only event is headlined by a pair of title fights, as newly crowned lightweight king George Hardwick puts his title on the line for the first time against Scotland’s Chris ‘The Bad Guy’ Bungard, while Sam Creasey defends the flyweight strap against another of the UK’s most tenured 125lb’ers: Shaj ‘Superman’ Haque.

Capping off the year is another Cage Warriors first, as Team Europe takes on Team USA at CW 148 on New Year’s Eve.

CW favourites from both sides of the Atlantic will clash with bragging rights on the line, as the legendary Cage Warriors’ NYE party returns for the first time in nine years!

With bouts set to be announced in the coming weeks, fans will not only be treated to a spectacular night of action at London’s Indigo @ The O2, they’ll also be able to ring in the new year with a bar and DJ until 1am.

In addition, King’s Row ticket holders will have access to an exclusive afterparty with the stars of CW 148 until the early hours!

Tickets for the only place a fight fan needs to be this New Year’s Eve are available from CageWarriors.com now!